From Wikipedia, the free encyclopedia
Jump to navigation Jump to search
Deities or spirits of the underworld
This article is about the Greek deities. For the band, see Chthonic (band). For other uses, see Chthon (disambiguation).

The Remorse of Orestes, where he is surrounded by the Erinyes, who were identified as chthonic beings, by William-Adolphe Bouguereau, 1862

Chthonic (/ˈθɒnɪk/, UK also /ˈkθɒn-/; from Ancient Greek: χθόνιος, romanized: khthónios [kʰtʰónios], "in, under, or beneath the earth", from χθών khthōn "earth")[1] literally means "subterranean", but the word in English describes deities or spirits of the underworld, especially in Ancient Greek religion. The Greek word khthon is one of several for "earth"; it typically refers to that which is under the earth,[2] rather than the living surface of the land (as Gaia or Ge does), or the land as territory (as khora χώρα does).[3] 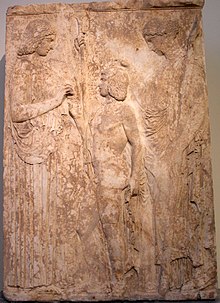 Triptolemus standing between Demeter and Kore, relief from the National Archaeological Museum of Athens

Chthonic, a form of khthonie and khthonios, has a precise meaning in Greek; it refers primarily to the manner and method of offering sacrifices to a specific deity or deities, generally referred to as chthonic or chthonian deities. These include, but are perhaps not strictly limited to, Persephone and Hades in classical mythology.

Nocturnal ritual sacrifice was a common practice in many chthonic cults. When the sacrifice was a living creature, the animal was placed in a bothros (βόθρος, "pit") or megaron (μέγαρον, "sunken chamber").[4] In some Greek chthonic cults, the animal was sacrificed on a raised bomos (βωμός, "altar"). Offerings were usually burned whole or buried rather than being cooked and shared among the worshippers.[5]

In his book The Mycenaean World, linguist and classicist John Chadwick argues that many chthonic deities may be remnants of the native Pre-Hellenic religion and that many of the Olympian deities may come from the Proto-Greeks who overran the southern part of the Balkan Peninsula in the late third millennium BC. He does, however, note that this may be somewhat of an overgeneralization and that the origins of chthonic and Olympian deities are probably much more complex.[6] The German classicist Walter Burkert explicitly rejects the notion of chthonic deities as pre-Greek and the Olympian deities as Indo-European in his book Greek Religion.[7] He comments, "It is the chthonic choai which are related to Indo-European, whereas the Olympian sacrifice has connections with Semitic tradition."[8]

The myths associating the underworld chthonic deities and fertility were not exclusive. Myths about the later Olympian deities also described an association with the fertility and prosperity of Earth, such as Demeter and her daughter, Persephone, who both watched over aspects of the fertility of the land, but Demeter had a typically Olympian cult while Persephone had a chthonic one, possibly due to her association with Hades, who she had married.[9][10]

The categories Olympian and chthonic were not, however, completely separate. Some Olympian deities, such as Hermes and Demeter, also received chthonic sacrifices and tithes in certain locations.[11] The deified heroes Heracles and Asclepius might be worshipped as gods or chthonic heroes, depending on the site and the time of origin of the myth.

Moreover, a few deities are not easily classifiable under these terms. Hecate, for instance, was typically offered puppies at crossroads – a practice neither typical of an Olympian sacrifice nor of a chthonic sacrifice to Persephone or the heroes – but because of her underworld roles, Hecate is generally classed as chthonic.

In analytical psychology, the term chthonic has often been used to describe the spirit of nature within, the unconscious earthly impulses of the Self, that is one's material depths, not necessarily with negative connotations.[12] See also anima and animus or shadow.

The term chthonic also has connotations with regard to gender in cultural anthropology; del Valle's Gendered Anthropology describes the existence of "male and female deities at every level... men associated with the above, the sky, and women associated with the below, with the earth, water of the underground, and the chthonic deities".[13] This was by no means universal; in Ancient Egypt the main deity of the earth was the male god Geb, his female consort was Nut, otherwise known as the sky.[14] Greek mythology likewise has female deities associated with the sky, such as Dike, goddess of justice, who sits on the right side of Zeus as his advisor, and Eos, goddess of dawn – and Hades (a male) as god of the underworld.[citation needed]

The term allochthon in structural geology is used to describe a large block of rock that has been moved from its original site of formation, usually by low angle thrust faulting. From the Greek "allo", meaning other, and "chthon", designating the process of the land mass being moved under the earth and connecting two horizontally stacked décollements and thus "under the earth".[15]

Chthonian planets are a hypothetical class of celestial objects resembling a terrestrial planet in many respects, resulting from a gas giant's atmosphere and outer layers stripped away, likely because of proximity to a star.[16]

An invention of H. P. Lovecraft in 1928, the name Cthulhu was probably chosen to echo the word chthonic, as apparently suggested by Lovecraft himself at the end of his 1923 tale "The Rats in the Walls".[17]