From Wikipedia, the free encyclopedia
Jump to navigation Jump to search
Ancient Greek goddess of the Moon
This article is about the Greek goddess. For other uses, see Selene (disambiguation).

In Greek mythology, Selene (/sɪˈliːniː/; Ancient Greek: Σελήνη [selɛ̌ːnɛː] "Moon") is the goddess of the Moon. She is the daughter of the Titans Hyperion and Theia and sister of the sun god Helios and Eos, goddess of the dawn. She drives her moon chariot across the heavens. Several lovers are attributed to her in various myths, including Zeus, Pan, and the mortal Endymion. In classical times, Selene was often identified with Artemis, much as her brother, Helios, was identified with Apollo.[3] Selene and Artemis were also associated with Hecate and all three were regarded as lunar goddesses, but only Selene was regarded as the personification of the Moon itself. Her Roman equivalent is Luna.[4]

Detail of a sarcophagus depicting Endymion and Selene, shown with her characteristic attributes of lunate crown and billowing veil (velificatio)[5]

The etymology of Selene is uncertain, but if the name is of Greek origin, it is likely connected to the word selas (σέλας), meaning "light".[6]

Just as Helios, from his identification with Apollo, is called Phoebus ("bright"), Selene, from her identification with Artemis, is also commonly referred to by the epithet Phoebe (feminine form).[7] The original Phoebe of Greek mythology is Selene's aunt, the Titaness mother of Leto and Asteria, and grandmother of Apollo, Artemis, and Hecate. Also from Artemis, Selene was sometimes called "Cynthia".[8]

Selene was also called Mene.[9] The word men (feminine mene), meant the moon, and the lunar month. It was also the name of the Phrygian moon-god Men.[10]

Philologist Max Müller's interpretation of solar mythology as it related to Selene and Endymion concluded that the myth was a narrativized version of linguistic terminology. Because the Greek endyein meant "to dive," the name Endymion ("Diver") at first simply described the process of the setting sun "diving" into the sea. In this case, the story of Selene embracing Endymion, or Moon embraces Diver, refers to the sun setting and the moon rising.[11]

The usual account of Selene's origin is given by Hesiod. In the Theogony, the sun-god Hyperion espoused his sister Theia, who gave birth to "great Helios and clear Selene and Eos who shines upon all that are on earth and upon the deathless Gods who live in the wide heaven".[12] The Homeric Hymn to Helios follows this tradition: "Hyperion wedded glorious Euryphaëssa, his own sister, who bare him lovely children, rosy-armed Eos and rich-tressed Selene and tireless Helios."[13] Here Euryphaëssa ("wide-shining") is probably an epithet of Theia.[14]

Other accounts[15] make Selene the daughter of Pallas, the son of Megamedes (possibly identified with Titan Pallas)[16] or of Helios.[17] 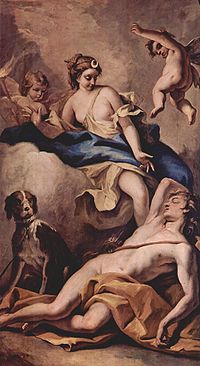 Selene is best known for her affair with the beautiful mortal Endymion.[18]

However, the first direct account comes from the third-century BC Argonautica of Apollonius of Rhodes, which tells of Selene's "mad passion" and her visiting the "fair Endymion" in a cave on Mount Latmus:[20]

And the Titanian goddess, the moon, rising from a far land, beheld her [Medea] as she fled distraught, and fiercely exulted over her, and thus spake to her own heart: 'Not I alone then stray to the Latmian cave, nor do I alone burn with love for fair Endymion; oft times with thoughts of love have I been driven away by thy crafty spells, in order that in the darkness of night thou mightest work thy sorcery at ease, even the deeds dear to thee. And now thou thyself too hast part in a like mad passion; and some god of affliction has given thee Jason to be thy grievous woe. Well, go on, and steel thy heart, wise though thou be, to take up thy burden of pain, fraught with many sighs.

Quintus Smyrnaeus' The Fall of Troy tells that, while Endymion slept in his cave beside his cattle, "Selene watched him from on high, and slid from heaven to earth; for passionate love drew down the immortal stainless Queen of Night."[21] The eternally sleeping Endymion was proverbial,[22] but exactly how this eternal sleep came about and what role, if any, Selene may have had in it is unclear.

According to the Catalogue of Women, Endymion was the son of Aethlius (a son of Zeus), and Zeus granted him the right to choose when he would die.[23]

A scholiast on Apollonius says that, according to Epimenides, Endymion, having fallen in love with Hera, asked Zeus to grant him eternal sleep.[24]

However, Apollodorus says that because of Endymion's "surpassing beauty, the Moon fell in love with him, and Zeus allowed him to choose what he would, and he chose to sleep for ever, remaining deathless and ageless".[25]

Cicero seems to make Selene responsible for Endymion's sleep, so that "she might kiss him while sleeping".[26]

From Pausanias we hear that Selene was supposed to have had by Endymion fifty daughters, who possibly represented the fifty lunar months of the Olympiad.[27]

Nonnus has Selene and Endymion as the parents of the beautiful Narcissus, but in other accounts, including Ovid's Metamorphoses, Narcissus was the son of Cephissus and Liriope.[28]

According to the Homeric Hymn to Selene, the goddess bore Zeus a daughter, Pandia ("all-brightness"),[29] "exceeding lovely amongst the deathless gods".[30] The 7th century BC Greek poet Alcman makes Ersa ("dew") the daughter of Selene and Zeus.[31] Selene and Zeus were also supposed by some to be the parents of Nemea, the eponymous nymph of Nemea, where Heracles slew the Nemean Lion, and where the Nemean Games were held.[32] Some accounts also make Selene and Zeus the parents of Dionysus, but this may be the result of confusing Semele, the usual mother of Dionysus, with Selene because of the similarity of their names.[33]

Whereas for Hesiod, the Nemean Lion was born to Echidna and raised by Hera,[34] other accounts have Selene involved in some way in its birth or rearing. Aelian, On Animals 12.7, states: "They say that the Lion of Nemea fell from the moon", and quotes Epimenides as saying: "For I am sprung from fair-tressed Selene the Moon, who in a fearful shudder shook off the savage lion in Nemea, and brought him forth at the bidding of Queen Hera."[35]

Quintus Smyrnaeus makes Helios and Selene (the Sun and Moon) the parents of the Horae, goddesses of the seasons.[36] Smyrnaeus describes them as the four handmaidens of Hera, but in most accounts their number is three, and their parents are Zeus and Themis.

According to Virgil, Selene also had a tryst with the great god Pan, who seduced her with a "snowy bribe of wool".[37] Scholia on Virgil add that the god wrapped himself in a sheepskin.[38]

Selene was also said to be the mother of the legendary Greek poet Musaeus.[39]

Statue of Selene, shown wearing the crescent on her forehead and holding a torch in her right hand, while her veil billows over her head

The air, unlit before, glows with the light of her golden crown, and her rays beam clear, whensoever bright Selene having bathed her lovely body in the waters of Ocean, and donned her far-gleaming raiment, and yoked her strong-necked, shining team, drives on her long-maned horses at full speed, at eventime in the mid-month: then her great orbit is full and then her beams shine brightest as she increases. So she is a sure token and a sign to mortal men.[41]

The earliest known depiction of Selene driving a chariot is inside an early 5th century BC red-figure cup attributed to the Brygos Painter, showing Selene plunging her chariot, drawn by two winged horses, into the sea.[42] Though the moon chariot is often described as being silver,[43] for Pindar it was golden.[44] While the sun chariot has four horses, Selene's usually has two,[45] described as "snow-white" by Ovid.[46] In some cases the chariot was drawn by oxen or bulls.[47]

Surviving descriptions of Selene's physical appearance and character, apart from those which would apply to the moon itself, are scant. Three early sources mention Selene's hair. Both the Hymn to Helios and the Hymn to Selene use the word εὐπλόκαμος, variously translated as "rich", "bright", or "beautiful haired", and Epimenides uses the epithet "lovely-haired".[48] The Hymn to Selene describes the goddess as very beautiful, with long wings and a golden diadem, calling her "white-armed" and "benevolent".[49] Aeschylus calls Selene "the eye of night".[50] The Orphic Hymns give Selene horns and a torch, describing her as "all-seeing", "all-wise", a lover of horses and of vigilance, and a "foe of strife" who "giv'st to Nature's works their destin'd end".[51] 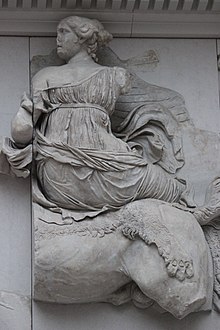 In antiquity, artistic representations of Selene included sculptural reliefs, vase paintings, coins, and gems.[52] In red-figure pottery before the early 5th century BC, she is depicted only as a bust, or in profile against a lunar disk.[53] In later art, like other celestial divinities such as Helios, Eos, and Nyx ("night"), Selene rides across the heavens. She is usually portrayed either driving a chariot or riding sidesaddle on horseback[54] (sometimes riding an ox, a mule or a ram).[55]

Paired with her brother Helios, Selene adorned the east pediment of the Parthenon, where the two framed a scene depicting the birth of Athena, with Helios driving his chariot rising from the ocean on the left, and Selene and her chariot descending into the sea on the right.[56] From Pausanias, we learn that Selene and Helios also framed the birth of Aphrodite on the base of the Statue of Zeus at Olympia.[57] There are indications of a similar framing by Selene and Helios of the birth of Pandora on the base of the Athena Parthenos.[58] Selene also appears on horseback as part of the Gigantomachy frieze of the Pergamon Altar.[59]

In later second and third century AD Roman funerary art, the love of Selene for Endymion and his eternal sleep was a popular subject for artists.[63] As frequently depicted on Roman sarcophagi, Selene, holding a billowing veil forming a crescent over her head, descends from her chariot to join her lover, who slumbers at her feet.[64]

In post-Renaissance art, Selene is generally depicted as a beautiful woman with a pale face and long, lustrous black hair, driving a silver chariot pulled either by a yoke of oxen or a pair of horses.[citation needed] 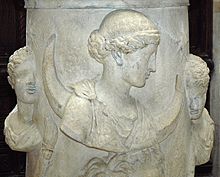 Selene from an altar piece, flanked possibly by the Dioscuri, or Phosphoros (the Morning Star) and Hesperus (the Evening Star), Louvre.[65]

Moon figures are found on Cretan rings and gems (perhaps indicating a Minoan moon cult), but apart from the role played by the moon itself in magic, folklore, and poetry, and despite the later worship of the Phrygian moon-god Men, there was relatively little worship of Selene.[66] An oracular sanctuary existed near Thalamai in Laconia. Described by Pausanias, it contained statues of Pasiphaë and Helios. Here Pasiphaë is used as an epithet of Selene, instead of referring to the daughter of Helios and wife of Minos.[67] Pausanias also described seeing two stone images in the market-place of Elis, one of the sun and the other of the moon, from the heads of which projected the rays of the sun and the horns of the crescent moon.[68]

Originally Pandia may have been an epithet of Selene,[69] but by at least the time of the late Homeric Hymn, Pandia had become a daughter of Zeus and Selene. Pandia (or Pandia Selene) may have personified the full moon,[70] and an Athenian festival, called the Pandia, usually considered to be a festival for Zeus,[71] was perhaps celebrated on the full moon and may have been associated with Selene.[72]

According to a certain Epigenes,[73] the three Moirai, or Fates, were regarded in the Orphic tradition as representing the three divisions of Selene, "the thirtieth and the fifteenth and the first" (i.e. the crescent moon, full moon, and dark moon, as delinted by the divisions of the calendar month).[74]