From Wikipedia, the free encyclopedia
Jump to navigation Jump to search
For the name, see Şeker. For the places in Azerbaijan, see Şəkər (disambiguation). For the Stargate SG-1 character, see Sokar (Stargate).

Seker (/ˈsɛkər/; also spelled Sokar) is a falcon god of the Memphite necropolis.

Seker-Osiris. The syncretized god Sokar-Osiris stands in a shrine. His iconography combines that of Osiris (atef-crown, crook and flail) and Sokar (falcon head, was-sceptre).

Although the meaning of his name remains uncertain, the Egyptians in the Pyramid Texts linked his name to the anguished cry of Osiris to Isis 'Sy-k-ri' ('hurry to me'),[1] or possibly skr, meaning "cleaning the mouth".[2] In the underworld, Seker is strongly linked with two other gods, Ptah the Creator god and chief god of Memphis, and Osiris the god of the dead. In later periods, this connection was expressed as the triple god Ptah-Seker-Osiris. 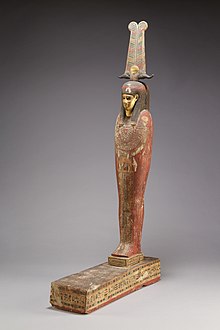 Seker was usually depicted as a mummified hawk and sometimes as a mound from which the head of a hawk appears. Here he is called 'he who is on his sand'. Sometimes he is shown on his hennu barque which was an elaborate sledge for negotiating the sandy necropolis. One of his titles was 'He of Restau' which means the place of 'openings' or tomb entrances.

In the New Kingdom Book of the Underworld, the Amduat, he is shown standing on the back of a serpent between two spread wings; as an expression of freedom this suggests a connection with resurrection or perhaps a satisfactory transit of the underworld.[1] Despite this, the region of the underworld associated with Seker was seen as difficult, sandy terrain called the Imhet (also called Amhet, Ammahet, or Ammehet; meaning 'filled up').[3][4]

Seker, possibly through his association with Ptah, also has a connection with craftsmen. In the Book of the Dead he is said to fashion silver bowls[1] and at Tanis a silver coffin of Sheshonq II has been discovered decorated with the iconography of Seker.[5] Seker's cult centre was in Memphis and festivals in his honour were held there on the 26th day of the fourth month of the akhet (spring) season. While these festivals took place, devotees would hoe and till the ground, and drive cattle, which suggests that Seker could have had agricultural aspects about him.[2]

Also as part of the festivals in akhet, his followers wore strings of onions around their necks, showing the Underworld aspect of him. Onions were used in embalming people - sometimes the skin, sometimes the entire onion. When just the skin was used, it would be placed on the eyes and inside the ears to mask the smell.[6]

Also, the god was depicted as assisting in various tasks such as digging ditches and canals. From the New Kingdom a similar festival was held in Thebes, which rivalled the great Opet Festival[2][5]

Other events during the festival including floating a statue of the god on a Henu barque, which was a boat with a high prow shaped like an oryx.[7]

In the 1956 movie The Ten Commandments, the Pharaoh Rameses II invokes the same deity to bring his deceased firstborn son back to life, while wearing a dark blue robe with a silver bow.

In the show Stargate SG-1, the Goa'uld villain Sokar is named after Seker. Sokar appears as a powerful and sadistic Goa'uld who chose the role of the Devil rather than a god like the rest of his species. He is killed when the moon he uses as his own personal version of Hell is blown up, destroying Sokar's ship in orbit and Sokar himself.

American technical death metal band Nile wrote the title track of their album “Annihilation of the Wicked” about the domain, occupation, and appearance of Seker. Curiously, the lyrics seem to describe Seker in the form of Seker-Osiris, not Ptah-Seker-Osiris, deliberately excluding the aspects of Ptah. The lyrics call him “ancient and dead,” a trait held by Osiris, but also describe him as being “shunned by Ra,” which would place the Seker they describe in the context of Heliopolis rather than Memphis.