From Wikipedia, the free encyclopedia
Jump to navigation Jump to search
Egyptian deity

Min (Egyptian mnw[1]) is an ancient Egyptian god whose cult originated in the predynastic period (4th millennium BCE).[2] He was represented in many different forms, but was most often represented in male human form, shown with an erect penis which he holds in his left hand and an upheld right arm holding a flail.

Min's cult began and was centered around Coptos (Koptos) and Akhmim (Panopolis) of upper Egypt,[3] where in his honour great festivals were held celebrating his "coming forth" with a public procession and presentation of offerings.[2] His other associations include the eastern desert and links to the god Horus. Flinders Petrie excavated two large statues of Min at Qift which are now in the Ashmolean Museum and it is thought by some that they are pre-dynastic. Although not mentioned by name, a reference to "he whose arm is raised in the East" in the Pyramid Texts is thought to refer to Min.[4] 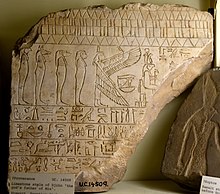 Fragment of a limestone stela of Djiho (Djedher), the God's Father of Min. Ptolemaic, 27th Dynasty. From Egypt. The Petrie Museum of Egyptian Archaeology, London

His importance grew in the Middle Kingdom when he became even more closely linked with Horus as the deity Min-Horus. By the New Kingdom he was also fused with Amun in the form of Min-Amun, who was also the serpent Irta, a kamutef (the "bull of his mother" - aka father of his own mother as well as her son). Min as an independent deity was also a kamutef of Isis. One of Isis's many places of cult throughout the valley was at Min's temple in Koptos as his divine wife.[5] Min's shrine was crowned with a pair of bull horns.[4]

As the central deity of fertility and possibly orgiastic rites Min became identified by the Greeks with the god Pan. One feature of Min worship was the wild prickly lettuce Lactuca virosa and Lactuca serriola of which is the domestic version Lactuca sativa (lettuce) which has aphrodisiac and opiate qualities and produce latex when cut, possibly identified with semen. He also had connections with Nubia. However, his main centers of worship remained at Coptos and Akhmim (Khemmis).[6]

Belemnite shown on left of Min

Male deities as vehicles for fertility and potency rose to prevalence at the emergence of widespread agriculture. Male Egyptians would work in agriculture, making bountiful harvests a male-centered occasion. Thus, male gods of virility such as Osiris and Min were more developed during this time. Fertility was not associated with solely women, but with men as well, even increasing the role of the male in childbirth.[7] As a god of male sexual potency, he was honoured during the coronation rites of the New Kingdom, when the Pharaoh was expected to sow his seed—generally thought to have been plant seeds, although there have been controversial suggestions that the Pharaoh was expected to demonstrate that he could ejaculate—and thus ensure the annual flooding of the Nile. At the beginning of the harvest season, his image was taken out of the temple and brought to the fields in the festival of the departure of Min, the Min Festival, when they blessed the harvest, and played games naked in his honour, the most important of these being the climbing of a huge (tent) pole. This four day festival is evident from the great festivals list at the temple of Ramses III at Medinet Habu.[5][8]

Cult and worship in the predynastic period surrounding a fertility god was based upon the fetish of fossilized belemnite.[7] Later symbols widely used were the white bull, a barbed arrow, and a bed of lettuce, that the Egyptians believed to be an aphrodisiac. Egyptian lettuce was tall, straight, and released a milk-like sap when rubbed, characteristics superficially similar to the penis. Lettuce was sacrificially offered to the god, then eaten by men in an effort to achieve potency.[7] Later pharaohs would offer the first fruits of harvest to the god to ensure plentiful harvest, with records of offerings of the first stems of sprouts of wheat being offered during the Ptolemaic period.[7]

Civilians who were not able to formally practice the cult of Min paid homage to the god as sterility was an unfavorable condition looked upon with sorrow. Concubine figurines, ithyphallic statuettes, and ex-voto phalluses were placed at entrances to the houses of Deir el-Medina to honor the god in hopes of curing the disability.[7] Egyptian women would touch the penises of statues of Min in hopes of pregnancy, a practice still continued today.[7]

In Egyptian art, Min was depicted as an anthropomorphic male deity with a masculine body, covered in shrouds, wearing a crown with feathers, and often holding his penis erect in his left hand and a flail (referring to his authority, or rather that of the Pharaohs) in his upward facing right hand. Around his forehead, Min wears a red ribbon that trails to the ground, claimed by some to represent sexual energy. The legs are bandaged because of his chthonic force, in the same manner as Ptah and Osiris.[5]

In Hymn to Min it is said:

Min, Lord of the Processions, God of the High Plumes, Son of Osiris and Isis, Venerated in Ipu...