From Wikipedia, the free encyclopedia
Jump to navigation Jump to search
This article is about the Egyptian goddess. For the ancient Egyptian symbol, see Eye of Horus.
"Wadjit" redirects here. For the Filipino rice cake, see Biko (food). 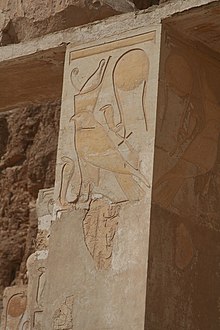 Two images of Wadjet appear on this carved wall in the Hatshepsut Temple at Luxor.

Wadjet (/ˈwɑːdˌdʒɛt/ or /ˈwædˌdʒɛt/; Ancient Egyptian: wꜢḏyt "Green One"),[1] known to the Greek world as Uto (Koinē Greek: Οὐτώ /ˈuːtoʊ/) or Buto (Βουτώ /ˈbuːtoʊ/) among other names including Wedjat, Uadjet, and Udjo,[2] was originally the ancient local goddess of the city of Dep.[3] It became part of the city that the Egyptians named Per-Wadjet ("House of Wadjet") and the Greeks called Buto (now Desouk),[4] which was an important site in prehistoric Egypt and the cultural developments of the Paleolithic. There was also a Per-Wadjet in Upper Egypt.

Wadjet was said to be the matron and protector of Lower Egypt, and upon unification with Upper Egypt, the joint protector and patron of all of Egypt. The image of Wadjet with the sun disk is called the uraeus, and it was the emblem on the crown of the rulers of Lower Egypt. She was also the protector of kings and of women in childbirth. Wadjet was said to be the nurse of the infant god Horus. With the help of his mother Isis, they protected Horus from his treacherous uncle, Set, when they took refuge in the swamps of the Nile Delta. [5]

Wadjet was closely associated in ancient Egyptian religion with the Eye of Ra, a powerful protective deity. The hieroglyph for her eye is shown below; sometimes two are shown in the sky of religious images. Per-Wadjet also contained a sanctuary of Horus, the child of the sun deity who would be interpreted to represent the pharaoh. Much later, Wadjet became associated with Isis as well as with many other deities.

In the relief shown to the right, which is on the wall of the Mortuary Temple of Hatshepsut at Luxor, there are two images of Wadjet: one of her as the uraeus with her head through an ankh and another where she precedes a Horus hawk wearing the Pschent, representing the pharaoh whom she protects.

As the patron goddess, she was associated with the land and depicted as a snake-headed woman or a snake—usually an Egyptian cobra, a venomous snake common to the region; sometimes she was depicted as a woman with two snake heads and, at other times, a snake with a woman's head. Her oracle was in the renowned temple in Per-Wadjet that was dedicated to her worship and gave the city its name. This oracle may have been the source for the oracular tradition that spread to Greece from Egypt.[6]

The Egyptian word wꜣḏ signifies blue and green. It is also the name for the well-known "Eye of the Moon".[7] Indeed, in later times, she was often depicted simply as a woman with a snake's head, or as a woman wearing the uraeus. The uraeus originally had been her body alone, which wrapped around or was coiled upon the head of the pharaoh or another deity.

Wadjet was depicted as a cobra. As patron and protector, later Wadjet often was shown coiled upon the head of Ra; in order to act as his protection, this image of her became the uraeus symbol used on the royal crowns as well.

Another early depiction of Wadjet is as a cobra entwined around a papyrus stem, beginning in the Predynastic era (prior to 3100 B.C.) and it is thought to be the first image that shows a snake entwined around a staff symbol. This is a sacred image that appeared repeatedly in the later images and myths of cultures surrounding the Mediterranean Sea, called the caduceus, which may have had separate origins.

Her image also rears up from the staff of the "flagpoles" that are used to indicate deities, as seen in the hieroglyph for "uraeus" and for "goddess" in other places.

The goddess Wadjet appears in the form of the living Uraeus to anoint your head with her flames. She rises up on the left side of your head and she shines from the right side of your temples without speech; she rises up on your head during each and every hour of the day, even as she does for her father Ra, and through her the terror which you inspire in the spirits is increased … she will never leave you, are of you strikes into the souls which are made perfect. – The Book of the Dead[11]

Protector of country, pharaohs, and other deities[edit]

Eventually, Wadjet was claimed as the patron goddess and protector of the whole of Lower Egypt and became associated with Nekhbet, depicted as a white vulture, who held unified Egypt. After the unification the image of Nekhbet joined Wadjet on the crown, thereafter shown as part of the uraeus.

Wadjet was associated with the Nile Delta region and was more associated with the world of the living. She was closely linked to pharaohs as a protective deity. She was associated, along with other goddesses, as the ‘eye of Ra’. Wadjet was often depicted as an erect cobra with its hood extended as though she were ready to strike. At times she was depicted wearing the Red Crown of Lower Egypt. Wadjet was depicted many times in her cobra form alongside her Upper Egyptian counterpart Nekhbet, in her vulture form wearing the Red Crown on wall paintings or on the pharaoh's headdress.[12]

Wadjet, as the goddess of Lower Egypt, had a large temple at the ancient Imet (now Tell Nebesha) in the Nile Delta. She was worshipped in the area as the "Lady of Imet". Later she was joined by Min and Horus to form a triad of deities.[13]

The Nazit Mons, a mountain on Venus, is named for Nazit, an "Egyptian winged serpent goddess".[14] According to Elizabeth Goldsmith, the Greek name for Nazit was Buto.[15]