From Wikipedia, the free encyclopedia
(Redirected from Thallo)
Jump to navigation Jump to search
For other uses, see Hora (disambiguation). 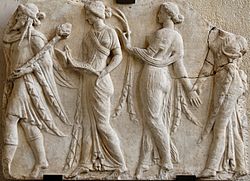 In Greek mythology the Horae (/ˈhɔːriː/) or Horai (/ˈhɔːraɪ/) or Hours (Greek: Ὧραι, Hōrai, pronounced [hɔ̂ːraj], "Seasons") were the goddesses of the seasons and the natural portions of time.

The word "Horae" comes from the Proto-Indo-European stem *Hioh1-r- "year."[1] 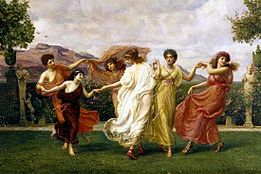 A detail of Horae Serenae by Edward Poynter (1894)

They were originally the personifications of nature in its different seasonal aspects, but in later times they were regarded as goddesses of order in general and natural justice. "They bring and bestow ripeness, they come and go in accordance with the firm law of the periodicities of nature and of life", Karl Kerenyi observed: "Hora means 'the correct moment'."[2] Traditionally, they guarded the gates of Olympus, promoted the fertility of the earth, and rallied the stars and constellations. The course of the seasons was also symbolically described as the dance of the Horae, and they were accordingly given the attributes of spring flowers, fragrance and graceful freshness. For example, in Hesiod's Works and Days, the fair-haired Horai, together with the Charites and Peitho crown Pandora—she of "all gifts"—with garlands of flowers.[3] Similarly Aphrodite, emerging from the sea and coming ashore at Cyprus, is dressed and adorned by the Horai,[4] and, according to a surviving fragment of the epic Cypria,[5] Aphrodite wore clothing made for her by the Charites and Horai, dyed with spring flowers, such as the Horai themselves wear.

The number of Horae varied according to different sources, but was most commonly three: either the trio of Thallo, Auxo and Carpo (goddesses of the order of nature) or Eunomia (goddess of good order and lawful conduct) and her sisters Dike (goddess of Justice) and Eirene (goddess of Peace).

In late euhemerist interpretations, they were seen as Cretan maidens who were worshipped as goddesses after they had been wrongfully stoned to death.

The earliest written mention of Horai is in the Iliad where they appear as keepers of Zeus's cloud gates.[7] "Hardly any traces of that function are found in the subsequent tradition," Karl Galinsky remarked in passing.[8] They were daughters of Zeus and Themis, half-sisters to the Moirai.[9][10]

The Horai are mentioned in two aspects in Hesiod[11] and the Homeric Hymns:[12]

Of the first, more familiar, triad associated with Aphrodite and Zeus is their origins as emblems of times of life, growth (and the classical three seasons of year):

At Athens, two Horae: Thallo (the Hora of spring) and Carpo (the Hora of autumn), also appear in rites of Attica noted by Pausanias in the 2nd century AD.[13][14] Thallo, Auxo and Carpo are often accompanied by Chione, a daughter of Boreas (the god/ personification of the North Wind) and Orithyia/ Oreithyia (originally a mortal princess, who was later deified as a goddess of cold mountain winds), and the goddess/personification of snow and winter. Along with Chione, Thallo, Auxo and Carpo were a part of the entourage of the goddess of the turn of the seasons, Persephone. 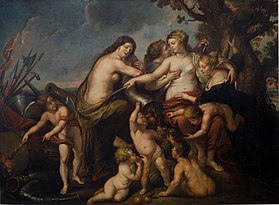 Allegory of peace and happiness of the state. In this picture we can see Dike (the justice), Eunomia (order) and, in the center, Eirene (the Peace)

Of the second triad associated to Themis and Zeus for law and order:

The last triad of Horae was identified by Hyginus:[14]

Nonnus in his Dionysiaca mentions a distinct set of four Horae, the daughters of Helios. Quintus Smyrnaeus also attributes the Horae as the daughters of Helios and Selene, and describes them as the four handmaidens of Hera.[15][16] The seasons were personified by the ancients, the Greeks represented them generally as women but on some antique monuments they are depicted as winged children with attributes peculiar to each season.[17] The Greek words for the four seasons of year:

Poussin has represented the four seasons by subjects drawn from the bible: Spring is portrayed by Adam and Eve in paradise: Summer, by Ruth gleaning: Autumn, by Joshua and Caleb bearing grapes from the promised land; and Winter, by the deluge.

In more modern representations the seasons are often surrounding Apollo: Spring, as Flora, crowned with flowers, and in a shaded green drapery over a white robe: Summer, standing under the lion in the zodiac, with a gold-coloured drapery over a white gauze vestment, the edges of which are tinged by the yellow rays of the sun, holding a sickle, having near her a wheat-sheaf : Autumn, as a Bacchante, in a violet-coloured garment, pressing grapes with one band into a golden cup, which she holds in the other; and Winter as an aged person, placed in the shade at a great distance from the god.[18][19]

Finally, a quite separate suite of Horae personified the twelve hours (originally only ten), as tutelary goddesses of the times of day. The hours run from just before sunrise to just after sunset, thus winter hours are short, summer hours are long:

According to Hyginus, the list is only of nine, borrowed from the three classical triads alternated:[20]

The ten or twelve Hours[edit] 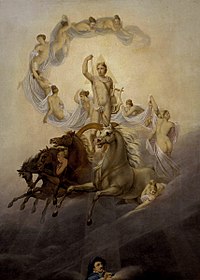 Apollo with the Hours by Georg Friedrich Kersting (1822)

A distinct set of ten or twelve Hours is much less known[21][22] and they are described as daughters of Chronos (Time):[23]

The last set of hours of the day and night is allegorically represented in the following:[24]