From Wikipedia, the free encyclopedia
(Redirected from The Graea)
Jump to navigation Jump to search
Three sisters in Greek myth
This article is about Greek mythology. For the British organization, see Graeae Theatre Company.
Not to be confused with Graea.
"Deino" redirects here. For the Pokémon, see Deino (Pokémon). For the prefix "deino-", see List of commonly used taxonomic affixes. 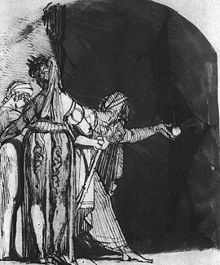 Perseus Returning the Eye of the Graiai by Henry Fuseli

In Greek mythology the Graeae (/ˈɡraɪiː/; English translation: "old women", "grey ones", or "grey witches"; alternatively spelled Graiai (Γραῖαι) and Graiae), also called the Grey Sisters, and the Phorcides ("daughters of Phorcys"),[1] were three sisters who shared one eye and one tooth among them. Their names were Deino (or Dino), Enyo, and Pemphredo (or Pephredo). 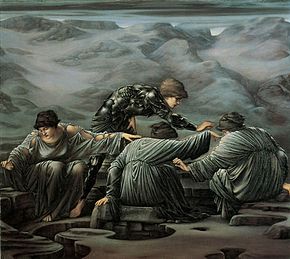 Perseus and the Graeae by Edward Burne-Jones (1892)

The Graeae were daughters of the sea-deities Phorcys and Ceto (from which their name the Phorcydes derived), and sisters to the Gorgons.[3] The Graeae took the form of old, grey-haired women. Their age was so great that a human childhood for them was hardly conceivable. In Theogony, however, Hesiod describes the Graeae as being "fair-cheeked". In Prometheus Bound, the Graeae are described as being half-swan.

Hesiod names only two Graeae, the "well-clad" Pemphredo (Πεμφρηδώ "alarm") and the "saffron-robed" Enyo (Ἐνυώ "horror" the "waster of cities" who also had an identity separate from this sisterhood).[4] Pseudo-Apollodorus lists Deino (Δεινώ "dread", the dreadful anticipation of horror) as a third.[5] Calling them "Phorcides", Hyginus, in addition to Pemphredo and Enyo, adds Persis noting that "for this last others say Dino".[6]

They shared one eye and one tooth, which they took turns using. By stealing their eye while they were passing it among themselves, the hero Perseus forced them to tell the whereabouts of the three objects needed to kill Medusa (in other versions the whereabouts of Medusa) by ransoming their shared eye for the information.[3]

The Graeae are similar to the Greek Moirai, the northern European Norns, the Roman Parcae, the Slavic Sudice, the Celtic Morrigan, and the Baltic goddess Laima and her two sisters. The Three Witches from the play Macbeth by William Shakespeare also are similar to the three Graeae.