The Isha prayer (Arabic: صلاة العشاء‎ ṣalāt al-ʿišāʾ  IPA: [sˤalaːt alʕiʃaːʔ], "night prayer") is the night-time daily prayer performed by practicing Muslims. It is the second[1] of the five daily prayers – (salat).[2][3] The five daily prayers collectively are one pillar of the Five Pillars of Islam, in Sunni Islam, and one of the ten Practices of the Religion (Furū al-Dīn) according to Shia Islam. It is a four rak'ah prayer and in Sunni Islam, the two Sunnah rak'ah following the Isha' are highly recommended and so is the three rakat Wajib Witr. There are a few optional prayers that can be recited after the Isha' prayer, including the Nafilat ul-Layl prayers (together termed tahajjud), as well as the tarawih in Ramadan. 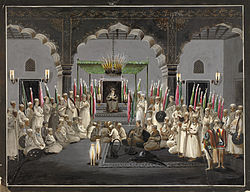 An Imam reads verses from the Quran after Isha' (night prayers) in the Mughal Empire.

The time period within which the Isha prayer must be recited is the following:

The time period within which the Isha prayer must be recited is the following:

However, it is very important to recite the prayer as soon as the time begins. Often Maghrib and Isha are offered together with a small gap of time in between.